The Thought Criminals were one of those unique bands whose popularity was based on their quirkiness as well as having great songs. Emerging from Sydney in late 1977 they found themselves wrapped up in the burgeoning Punk Rock scene, not a bad thing if you wanted to be part of it …… and luckily they… Read more 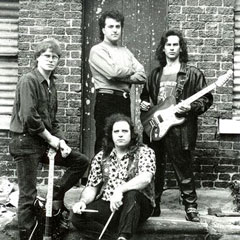 That’s Right! were a Sydney based Rock band who formed when members of cover band Shanghai became unhappy with the direction the band was taking. Realizing they had a common interest in doing original songs and wanting to take it into a rockier feel they recruited a new guitarist and after a few rehearsals started… Read more After he’d finished playing with The 69ERS for the final time, Peter Knox bounced around the Sydney music scene for a while, filling in on bass and making guest appearances with various bands, until he became bass player and co-comedian with a club ‘show’ called Country Scratch (based around the Caswell family – featuring a… Read more About the Ted Mulry Gang When the Ted Mulry Gang formed in 1972, Mulry was already a well-known pop balladeer. After getting tired of being backed by different backing bands, in 1972 he switched from acoustic guitar to bass and formed his own band, “Ted Mulry Gang”, with guitarist Les Hall & drummer Herman Kovacs… Read more