Way back in 1986 I was the sound engineer for Bandanna. Their manager was a guy called Steve Rondo who owned the “Rock Depot” rehearsal studio in Liverpool. Steve would keep an eye out for good up and coming bands to use as support acts for Bandanna and that’s how I first met the folks… Read more Formed in the summer of 1989 by a close group of high school friends, Psyclone Smyle were conspirators of Sydney’s anti-shoegaze movement, playing their part in the local rise of the funk metal genre. Emerging form the blues-rock scene of the inner western suburb Balmain, Psyclone Smyle were part of a small, close-knit collective of… Read more

The Prisoners were a short lived Sydney based Punk Rock band that emerged soon after Punk Rock band Rocks had disbanded. Bill Webb (a.k.a. Bill Posters) in early 1979 had approached his fellow Rocks‘ guitarist Peter Davie and drummer Greg Morris with the idea of putting a new Punk Rock band together. His idea was… Read more Pseudo Echo is a Melbourne based band originally active from 1982 to around 1998. They reformed around 2000 & still perform at the time of writing. Formed by school friends Brian Canham & Pierre Gigliotti, they were spotted early on by Molly Meldrum who put them on Countdown playing their first hit “Listening”. Their sound… Read more The Party Boys have been a concept that has always provided audiences with an opportunity to see fantastic musicians having a bit of fun. The latest incarnation is no exception. I hade the pleasure of seeing Kevin Borich’s Party Boyz on New Years Eve 2010 at Rooty Hill RSL and I’m so glad I did… Read more

Peculiar Clerk has been a popular band since it was added about a year ago. I remember seeing them at the Chester Hill Hotel around 1980 and they left a great impression. It was a small suburban pub with an ad-hoc stage but stood upon that stage was a bunch of guys who just rocked… Read more

About March 10 1979 to March 09 1984(Thanks to Martin Odgers for putting me onto this info) Peter Keen and Rob Manego went to the same High School in an Outer Western Suburb of Sydney. With a couple of schoolmates, they set about forming a band. A number of members came and went before a… Read more 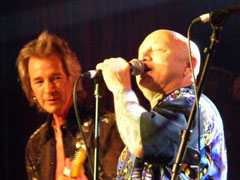 About Ex-Mondo Rock member Paul Christie formed Party Boys in 1982 as an occasional “supergroup” consisting of some of Australia’s finest musicians. The concept was that Christie would employ players (all of whom had other commitments) when the need arose, and that the set they played would consist entirely of cover versions.By 1987, the band… Read more