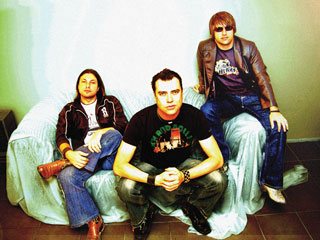 Sydney based band, Jonah’s Road, has developed a significant following in the Australian music scene over the past few years. The contemporary sound is a feature gaining them many new fans and the respect of their peers thanks to fantastic live shows, tight vocal harmonies and great songwriting.
The highly anticipated new album, Counting Down The Days, was released in January 2007 and is expected to repeat the success of the band’s multi-award winning first album Hold On. Jay, John & Rodney spent most of 2006 writing and recording the album. It was recorded and co-produced by Matt Fell at Love Hz studios and mixed by Robbie Specogna
at Main Street Studios. The result is a collection of upbeat songs and soaring ballads highlighting the harmony-driven, country-pop sound for which the band is becoming well known. The first radio single is the title track Counting Down The Days which is an upbeat song written by Jay & Jasper Somerville-Collie in collaboration with Travis List.
from Jonah’s Road Bio

The debut album Hold On was released in September 2004 and received great feedback from fans, music industry personnel and the media. The release of the album led to several awards and host of nominations for the band: