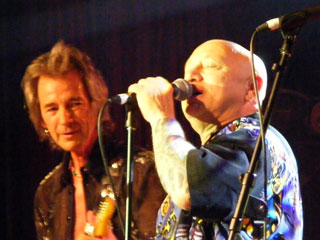 Ex-Mondo Rock member Paul Christie formed Party Boys in 1982 as an occasional “supergroup” consisting of some of Australia’s finest musicians. The concept was that Christie would employ players (all of whom had other commitments) when the need arose, and that the set they played would consist entirely of cover versions.

By 1987, the band had released four live albums (and a Best Of collection), with Live At Several 21sts (1983) making the national Top 10. The band finally entered the recording studio in 1987 to put down a cover version of John Kongas’ 1971 hit He’s Gonna Step On You Again, which reached Number One.
From Nostalgia Central